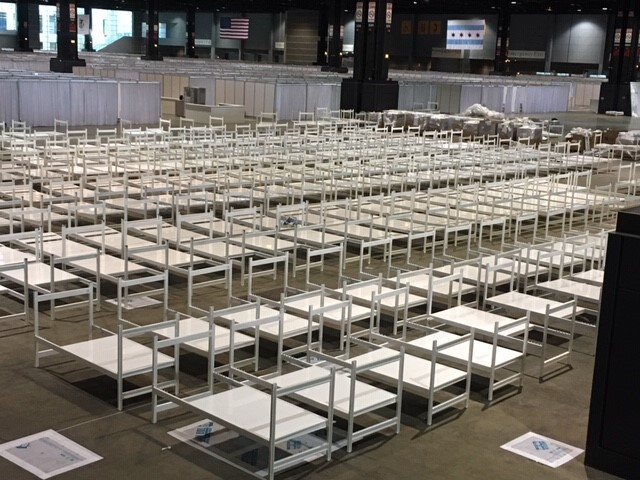 Accurate Metal Fabricating has added a brand new product line – medical beds. In a matter of days it has used the expertise it gained from years of custom sheet metal fabricating to retool itself into a key supplier of rapid deployment medical beds to the Army Corps of Engineers and the City of Chicago. How they did so is yet another example of how a combination of ingenuity and determination in the face of adversity is helping to fuel our nation’s response to the COVID-19 crisis.

Jeff Kaminsky, National Sales Manager for Accurate Metal Fabricating (“AMF”) and its parent company, Accurate Perforating Inc., wanted to help. AMF, located in Chicago’s 36th Ward on the near west side, has been in business continuously since 1939. Purchased by its current owners in 2006 and given its current name, AMF uses a combination of high-tech equipment and a skilled and dedicated workforce to perform precision sheet metal fabrication for customers in virtually every sector of the economy, ranging from retail to transportation, medical, and everything in between.

When plans were announced to create an alternative care facility (“ACF”) at McCormick Place, Kaminsky started making phone calls. “I called pretty much everyone I knew who might have connections either federal, state or local. I had no idea what we could do to help, so I just kept asking, over and over, what can we do?” Eventually Kaminsky hit upon the idea of providing beds to the Army Corps of Engineers for the ACF at McCormick Place. He found a phone number for the Army Corps of Engineers (USACE) and called it. An Office
Manager answered and he pitched her on AMF’s offer to help. She responded favorably and eventually he worked his way up to the USACE’s Commanding General.

This started a fast-paced process in which, in the course of less than ten days, AMF developed a design for a “Rapid Deployment Emergency Medical Bed,” developed drawings, a manufacturing process and pricing; responded to multiple, last-minute changes in specifications, identified sources for components that needed to be outsourced (such as mattresses), assessed manpower requirements (including sources for any temporary workers who might be needed); communicated with the Union who represents AMF’s workers to address any potential contractual issues; submitted a formal bid to the USACE and the City of Chicago; and continued to make and respond to design changes until and even after delivery of the first beds.

Although the design changed multiple times from conception to execution, the final version displayed an ingenious combination of features. “Previous designs the Corps had worked with, were basically just a flat piece of steel with legs,” said Kaminsky. “But that didn’t work for COVID patients, many of whom have pneumonia and require the ability to have their upper body lifted. We also built an IV stand into the bed, and added caster wheels. The end result was a highly functional medical bed that could be assembled in less than 5 minutes. It was a hard road to get to that final design, but the City and the Corps were very happy with
it, and so were we.”

AMF was initially told that the Corps was looking at five different bids. On Friday, April 3, AMF learned that its bid had been accepted. But AMF was already gearing up for work. “We had 25 employees here working overtime that weekend, even before we had a signed contract,” said Aaron Kamins, president of Accurate Perforating. “I was enormously impressed by the dedication our people showed. They saw we had a need and they agreed to fill it, no questions asked. We couldn’t have done this without them.”

The Company is especially proud of the team effort involved in its amazing feat of new product development. “Everyone from our CFO to our Sales, Marketing, Engineering and Operations teams played key roles,” says Kamins. “Also, even the few parts and labor we outsourced, went to domestic sources. This is truly a ‘Made in USA’ product, with most of the labor performed right here in the City of Chicago, with Union labor. I was also impressed by the attitude of our employees and their Union, the Plastic Workers’ Union Local 18.  Everyone displayed a fantastic can-do attitude, under very difficult circumstances. But in the end, everyone from the top of the company down to the folks who cleaned and sanitized our facility, came through for us. I couldn’t be more proud of everyone here.”

Since getting the news that its bid had been accepted, AMF’s employees have been working nearly around the clock to manufacture, assemble and deliver nearly 2000 beds to the McCormick Place ACF. The Company has also launched a new division, Accurate Medical Products, to help market its beds and other related medical products, including partition walls that can be quickly deployed to create more space in a hospital or medical facility. Meanwhile, AMF delivered its first batch of parts on Wednesday, April 8, barely a week after Kaminsky started pitching AMF as a source. And just two days after that, on April 10, the first of nearly 2000 beds were assembled and installed at McCormick Place.

As Kaminsky described it, “In just ten days we went from being a custom metal fabricator with basically no experience making medical beds, to fabricating and delivering nearly 20 semi truckloads of beds and mattresses for the McCormick Place ACF to do our part responding to the COVID-19 crisis. We even finished the project a full day and a half ahead of schedule. And now we’re getting inquiries from all over the country, not just for medical beds, but also for partitions for hospital rooms and all kinds of other pandemic-related products. It’s really a pretty amazing story.”